Request Appointment
Get In Touch

We Have Reduced Rates For Uninsured Patients!

Tissue Doppler imaging (TDI)? We at Life Imaging can perform your Echocardiogram with TDI measurements in Dade or Broward County, Florida at a reduced fee. Please Call (954) 436-6622.

In Echocardiography, Tissue Doppler Imaging (TDI) is a technique that uses Doppler principles to measure the velocity of myocardial motion.

TDI can be performed in pulsed-wave and color modes. Pulsed-wave TDI is used to measure peak myocardial velocities and is particularly well suited to the measurement of long-axis ventricular motion because the longitudinally oriented endocardial fibers are most parallel to the ultrasound beam in the apical views. Because the apex remains relatively stationary throughout the cardiac cycle, mitral annular motion is a good surrogate measure of overall longitudinal left ventricular (LV) contraction and relaxation.

During the two filling phases, there is early (E) and late (A) blood flow from the atrium to the ventricle, corresponding to the annular velocity phases. The flow is driven by the pressure difference between atrium and ventricle, this pressure difference is both a function of the pressure drops during early relaxation and the initial atrial pressure. In light diastolic dysfunction, the peak early mitral flow velocity E is reduced in proportion to the e', but if relaxation is so reduced that it causes increase in atrial pressure, E will increase again, while e', being less load dependent, remains low. Thus, the ratio E/e' is related to the atrial pressure, and can show increased filling pressure, although with several reservations. In the right ventricle this is not an important principle, as the right atrial pressure is the same as central venous pressure which can easily be assessed from venous congestion.

What happens during the Echocardiogram exam?
The patient lies on a table while turned on their left side of the body. The sonographer (technologist who performs the exam) will put a warm water-based gel on the skin surface. The gel helps to transmit the sound waves by excluding air. An instrument called a transducer, which is about the size of a microphone, will be moved over the skin surface by the sonographer.

How do I prepare for this test?
No preparation is needed.

How long will it take?
The standard echocardiogram takes about forty-five minutes.

Will it hurt?
No.

How will I learn the results?
You may call your doctor to discuss the results. 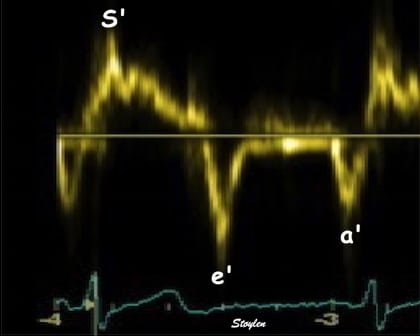